Echoes are our friends 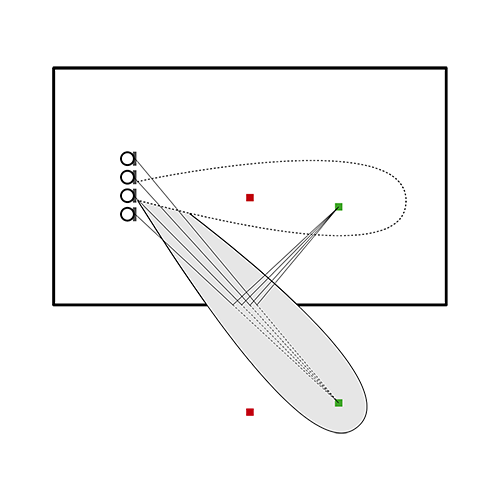 Research in psychoacoustics has shown that early echoes arriving within 30 to 90 ms of the direct sound improve intelligibility. Building on the intuition that what is true in humans might be true for audio processing in general, we augment a number of classic algorithms by including the knowledge of a few early echoes in their design. We then provide evidence that algorithms including echoes perform better than those ignoring or suppressing them.

This is a joint research project with Ivan Dokmani'{c} (UIUC), Antoine Deleforge (INRIA), Diego Di Carlo (INRIA). We hope to promote further the appreciation for echoes by applying similar ideas to scene analysis and recognition tasks for example.

Beamformers combine the signal from multiple microphones to focus the acquisition towards some regions of space. We propose a number of beamforming algorithms that maximize some well-defined criteria that include echoes. This results in the created beams to focus not only on the direct sound, but also towards strong reflections on walls. This enable some previously impossible tasks such as listening behind an interferer placed between the microphones and the target source. This is effectively done by steering the beams towards the reflections on the walls, ignoring the direct path completely.

The code is available on github for frequency domain and time domain. The papers are here and here.

More recently, we showed similar results in the domain of source separation. Here we use non-negative models of the spectrogram and a well known algorithm for their separation. While the original algorithm attempts the estimation of the room impulse responses (RIR) together with the separation of the speeches, we assume the knowledge of one to five echoes and use that to form a poor man’s estimate of the RIR. We then discovered that using even a single echo outperforms the fully blind approach. Adding more echoes, only then improves things further.

The code is available on github and sound samples are below. The paper is here.